According to the ALA (American Library Association), "Banned Books Week (BBW) is an annual event celebrating the freedom to read and the importance of the First Amendment. Held during the last week of September, Banned Books Week highlights the benefits of free and open access to information while drawing attention to the harms of censorship by spotlighting actual or attempted bannings of books across the United States." Basically it is a week celebrating all of those books that push the envelope, discuss controversial subjects, or are deemed immoral in some way shape or form. This definition covers a lot of books, and many that are considered as "classics" now and even the Bible and the Qur'an. This is totally awesome!

I've tried finding a complete list of all banned, censored, or challenged books, but none fo the lists I've seen match up completely. Here are a few links: Wikipedia, banned-books.com, Alder & Robin Books. I wonder how Boston is celebrating and if Salman Rushdie is doing okay?

For my own personal celebration I am going to read a banned book. I'm not entirely sure which one, but I'm leaning toward re-reading A Clockwork Orange by Anthony Burgess.

People- Go out and celebrate your freedom of speech and thank God that you live in an open-minded society! And check out this blog post.
Posted by Liz Svoboda at 9:22 AM No comments:

When guys take over Jane Austen 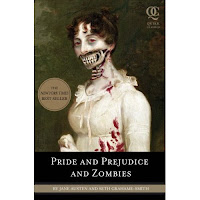 I first heard of this book earlier this year when it was suggested for me by Amazon. You know one of those annoying emails that fill up your inbox and you know you should ignore them, but they still make you curious enough to open them? Any hoo, I was appalled at first because the very idea of messing with Jane Austen is just taboo in my book, especially when you make Elizabeth Bennett fight zombies while verbally sparring with Mr. Darcy. Here is a link to my original view point of this book, written in the heat of the moment.

However, a copy came into the Undergrad today and - I'm curious. I mean ... who would come up with mixing zombies and Jane Austen? Really? Even for a guy it's a little far-fetched. So I'm curious and I think I may read it but, I'm still not sure if it will ruin one of my favorite books of all time. However, I can always fall back on North and South by Elizabeth Gaskell if I want an untainted English comedy of manners with a tall, dark, handsome, and brusk male lead.

I will keep you aprised of any further developments.
Posted by Liz Svoboda at 6:21 PM No comments:

I've always felt that reading comic books, graphic novels, and manga (yes, there is a difference) always had a certain stigma attached to the act, but recently I've changed my mind. I was taking down a cart of books to shelve at the Undergrad and saw the first three volumes of Fables by Bill Willingham amongst the other books. I began to peruse them and got hooked. They're basically about all the fairytale and fable characters in literature and how they were driven out of their Homelands by the Adversary and now live in our "mundy" (short for mundane) world.

It is possibly the most awesome story line I've read in awhile. Not only does Willingham show a great knowledge of his Grimms brothers and other sundry traditions, the world he has crafted for his characters is so ... awesome. Everyone has their flaws and foibles, but you get attached to them just the same. His cast includes Snow White (no dwarfs, so far), Bigby Wolf, King Cole, Prince Charming, Boy Blue, and even non-human Fables like the Three Bears and the Liliput people. It's absolutely amazing the amount of creative genius that's been put into the series and I can't wait to read the next one.

My anxiousness is basically why I'm writing this post. I've finished both volumes I brought to work, and am too keyed up to do much else. I think I'll ride back to my room during break and get the other two I have checked out from the library. However, my entertainment will be short-lived as I only have one more to go before I reach the road block of the bindery. *sigh*

Here's a link to find out more:

http://en.wikipedia.org/wiki/Fables_(comic)
Posted by Liz Svoboda at 5:09 PM No comments: