I'm just going to admit it - my literary guilty pleasure is paranormal fiction.  I do like the, ahem, steamier moments and the epic battle scenes, but what really interests me is all the different mythologies about paranormal creatures, especially vampires.  I know it's kind of playing into the whole Twilight thing, but there are a lot of other series out there that are better written and more creative.  Here are some of the series that I have read and enjoy.

Laurell K. Hamilton -- She actually has two series, and both are high on the steamy meter. One about Anita Blake, an animator (someone who raises zombies) and a vampire executioner, who has a very complicated love life and is lives under the threat of being annihilated by various powers of evil.  The second is about Meredith (Merry) Gentry, an American Faerie princess, who also has a very complicated love life, has the threat of an evil queen's machinations, and moonlights as a private investigator.  There are other similarities between Anita and Merry, mainly physical build and the propensity to be the tough girl, but each series has me coming back for more.  I just want to find out what happens.

Kresley Cole -- Her series is called Immortals After Dark and is straight up paranormal romance.  The focus is a coven of valkyrie and a coven of witches who find their fated mates, werewolves, vampires, and a couple of demons.  I have no excuse for liking this series except that the characters are rather endearing and the mythology behind it is incredibly interesting.

Lindsay Sands -- Her Argeneau/Rogue Hunters series, more paranormal romance, is about a family of immortals (vampires) who are all finding "lifemates."  Her take on the vampire myth is one of the most original I have read: immortals are survivors from the fall of Atlantis who had "microbes" introduced into their blood stream to repair any injury and cure any disease and their fuel is blood, but the microbes work too well as the body is constantly sustaining damage (i.e. the sun).  The immortals need to ingest blood so their bodies evolved fangs; in the modern world they drink bagged blood.  Hilarity ensues as the "lifemates" are usually mortals who only know the traditional "damned, soulless creature of the night" myth.  Also the titles are great, Vampire Interrupted and A Bite to Remember are two of the better ones.

Charlaine Harris --She writes the Sookie Stackhouse series, the basis of the HBO series True Blood. My roommates began watching the first season and I got hooked, so I did the English major thing and read the books.  There are quite a few differences between the book and TV series, mainly that Tara, Eggs, Andy Bellefleur, and Lafayette are not main characters.  The books are a lot more humorous, especially Eric.

Jim Butcher -- He is the author of The Dresden Files, which feature the Chicago's only wizard in the yellow pages, Harry Dresden.  Harry looks like a bit of a ne'er-do-well, but is a great guy who fights on the side of good and makes the tough decisions. My favorite battle is when he necromances Sue the T-Rex to life and rides her into battle.  The last books, Changes, ended with a huge cliff hanger and I still cannot wait for the next book to come out in March, ironically on my birthday!  His wife Shannon is also a paranormal author, but her series is a romance.

Patricia Briggs -- Her Mercy Thompson Series is based in the Tri-Cities of Washington state and focuses on Mercy Thompson, a coyote shape-shifter who was raised by the leader of all American werewolves and falls for the local alpha.  Mercy is a smart-alec mechanic who can talk to the dead and gets in trouble with the fae. The series is well-written and and smart with a sexy alpha too boot.

Kim Harrison -- She writes the The Hollows series about Rachel Morgan, a witch turned private investigator who lives with a vampire, not yet turned soulless. I like her spin that the paranormals have always been living with us, but didn't come out of the coffin, so to speak, until a virus in tomatoes killed off the majority of the human population.  There are also so cute titles; my favorite being The Good, the Bad, and the Undead. I am quite a few books behind in th series; there was a big gap between the books coming out and I couldn't get back into the swing of the plot.

Angela Knight -- Her Mageverse series is the other incredibly original take on the vampire myth, mixing the paranormal with Arthurian legend.  Merlin was an alien that turned the round table and their ladies into vampires and witches respectively.  He also created werewolves as a check for the Magi, as the vamps and witches are properly called.  This series teeters on the line between romance and adventure, but definitely leans more toward steamy romance.


These are by no means a comprehensive list, but they are the ones I have read.  I really need to branch out; I've heard P.N. Elrod is good, and here is a list from GoodReads that I have to look into.

Introducing the Daughters of Jane!

After much deliberation I have decided to create a recurring all-things-Austen segment as part of this blog.  It will be called "Daughters of Jane" as an allusion to the Sons of Ben, the group of Ben Jonson's young poet proteges.

Let Austen-mania commence!  There are so many Austen inspired movies, chick-lit novels and spoofs that there is no way to cover all of them, but what I encounter I will blog about.  So most of the novel spin-offs will be coming from a lecture my comparative world lit. professor mentioned in a lecture devoted entirely to Austen spin offs.  So look forward to more posts about Austen-esque novels, movies, and spoofs.

Posted by Liz Svoboda at 9:02 PM No comments:

Recently I have been considering the idea of branching out in the blog-sphere and writing another blog.  Do not be alarmed my few and faithful followers, I will continue to spout my mind's junk onto this blog, but recently a lot of junk has been building up in one specific category and I need an outlet.  The category is this: Jane Austen.

I realize that as a female English major, loving Austen is somewhat cliche, but I confess that I do love her wit.  But what kind of fascinates me is the cult of Austen that sprang up in the 1990s and continues today.  There are countless spin offs and published (and not published... thank you Denise, my eyes still burn) fan-fics as well as movies.  Not to mention the blogs!  So hear is the question, should I add my voice to the multitude out there already spouting their love of all things Austen or should I simply make them a recurring segment on this blog?

Please report back.  And to entertain you... from Kate Beacon's Hark, A Vagrant, I present Jane Austen!

Posted by Liz Svoboda at 6:45 PM No comments:

Autumn is my favorite season, mainly because of the color palette.  This season I have noticed all of the half-turned trees that are multi-hued and they are gorgeous!  See what I mean... 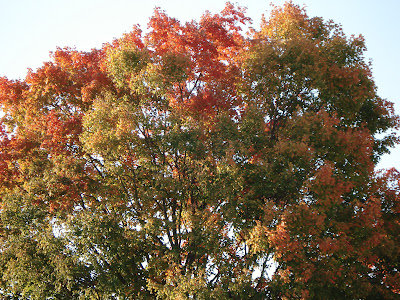 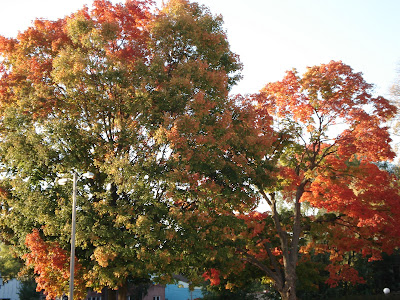 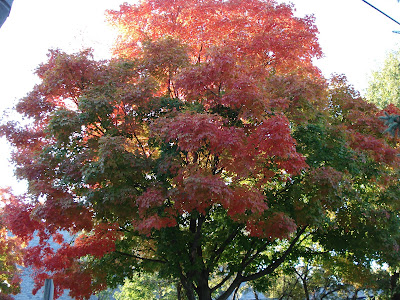 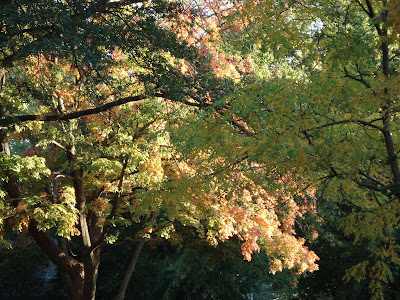 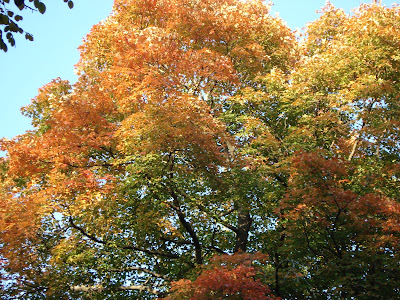 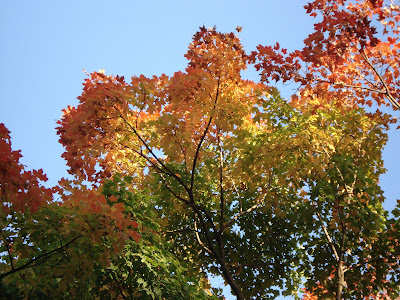 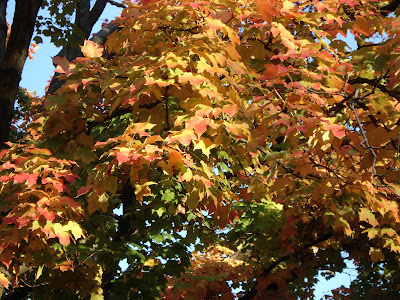 Posted by Liz Svoboda at 7:12 PM No comments: