So I have definitely been out of the blogosphere for awhile, but it is not entirely my fault (AT&T screwed me out of a month's worth of Internet; it's a long story). Anyway, I'm back and hopefully will be more involved with my poor, neglected blog.

So a few weeks ago, I was browsing the new book shelves at the Champaign Public Library and I stumbled across Pemberly Ranch by Jack Caldwell. Think Pride and Prejudice meets Gone With the Wind (the tag line on the back cover is "Frankly Mr. Darcy, I  don't give a damn..."). It's set in post-Civil War Texas with the Bennets as transplanted Yankees and Darcy as a rich rancher (Darcy in a cowboy hat ... yum).  I really enjoyed this retelling because though it kept the same spirit of the story it transformed the Georgian comedy of manners into a Western romp complete with a cattle drives, barbecue, a whorehouse, and a railroad scheme. It was an entertaining read and I highly recommend it to Austen lovers, who are tired of the sequels and variations that try and fail to imitate Austen's style or are just a little to trite.

While I was perusing the shelves, I found another five P & P variations or continuations and all their titles have something to do with Darcy: What Would Mr. Darcy Do?, Mr. Darcy's Obsession, Mr. Fitzwilliam Darcy: The Last Man in the World, Mr. Darcy's Little Sister, and The Darcys & the Bigley's.

I was intrigued. How many times could P&P be retold? I checked them all out and found out. 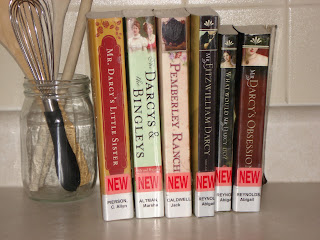 The last three in the photo are all variations by Abigail Reynolds. Each of them diverge from the original story by changing one single event. Basically her premise is what if this happened, instead of this.


I read all of them, and they weren't bad. They have nothing on the original, but each explores a different facet of  Darcy's character. What Would focuses on his generosity. Obsession focuses on his loyalty and overcoming his prejudice. Last Man focuses on his pride. The one thing they all have in common: Elizabeth and Darcy end up happily-ever-after. Which begs the question, who will destroy the fantasy and write a story where E and D don't end up together?

The other two books are continuations, picking up where P&P leaves up.

I read Mr. Darcy's Little Sister by C. Allyn Pierson, which of course features Georgiana, but there was a whole lot of E and D as well. This book was a little hard to get through, just because the style felt a little forced, but the look into the Ton lifestyle was interesting, as Austen never touched on it though Darcy is related to the nobility.

After reading all the above P&P inspired novels in succession, I just couldn't bring myself to read another, even though the basis of The Darcys & the Bingleys by Marsha Altman is that Darcy gives Bingley the Kama Sutra as sex advice. But from the skimming I did, there weren't many steamy scenes and Jane and Elizabeth spend a great deal of time pregnant.

There obviously so many ways to riff on Austen's works, but the allure of P&P and Darcy is overwhelming. The fact that all six of the books I found in CPL's new fiction section somehow mention Darcy in the title suggests that the Darcy complex is still a strong force, even if he is an intolerable a**hole in the original. But what is even more astounding is that all six books were published by Sourcebooks Landmark, a publisher who seems to make all its money on P&P inspired books with 64 books published with "Darcy" in the title, plus an entire section of Austen sequels. Sourcebooks is not the only publisher cashing in on the Austen craze; just check out these Listopia lists from GoodReads:


How long will the Austen craze last? Will the Darcy Obsession continue? I don't know, but for right now they are going strong if these articles provide any evidence:

Email ThisBlogThis!Share to TwitterShare to FacebookShare to Pinterest
Labels: Books, Daughters of Jane