In mid-October two of my friends got married and as their wedding gift I decided to make an afghan for them. Since they're both gamers I decided to design a Tetris pattern for them. It's an idea I'd been kicking around for awhile, since the Tetris pieces are in blocks of four.

I started by finding a plain granny square that was completely solid. So many of the granny patterns I've seen have spaces, or tiny corner gaps that would not mimic the look of the Tetris blocks to the extent I wanted. I lucked out when I found the "Simple Solid Granny Square" by Krisite-Beth on my Pinterest board "Grannies & Blocks" (I swear I should never have to buy another crochet book or pattern based on the shear number of things I've pinned).

I then needed to decide on the colors for the different Tetirs blocks. I modeled my design off of those found on Free Tetris, although an image search will show quite a few variations on what color is assigned to what shape. I tried to match the colors as closely as I could, so I chose Red Heart Super Saver's Aruba Sea (light blue), Bright Yellow, Blue, Hot Red, Tea Leaf (green), Pumpkin, and Medium Purple for the shapes and Grey Heather as the background.

Planning out the actual design came next. Using graph paper I laid out my design to find a good arrangement and figure out approximately how many skeins I would need. I drew it a few times, but ended up going with the following layout (slightly wrinkled). 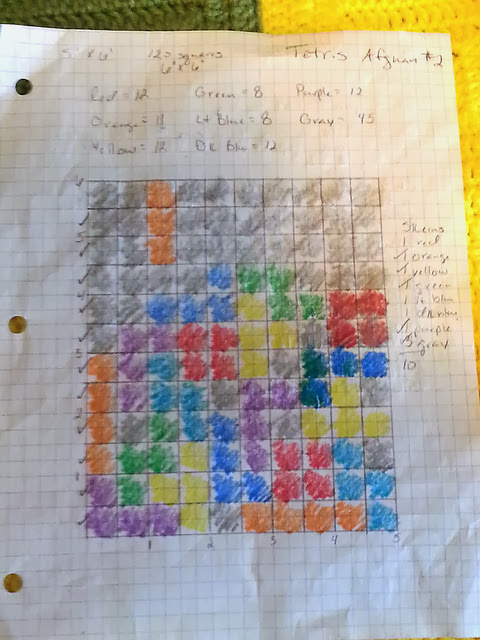 I tried to balance the colors, but keep a fairly random feel to the pattern, again to mimic the game as much as possible. I also wanted to make it look like the game was still going on, so I had one piece appear to be dropping down from the top.

Each square is approximately 6 in. across and made up of 6 rounds. They are laid in a 10 x 12 grid making the total number of squares 120 with the following breakdown.

After making most of the squares I laid them out to check how large the blanket would be and decided to nix the topmost row because it was getting too long, making a 10 x 11 grid. I under estimated the squares size, but I figure it's better to have too much yarn than too little.

Here's the final product. For more information check out my Ravelry project page at http://www.ravelry.com/projects/LizSvoboda/simple-solid-granny-square. 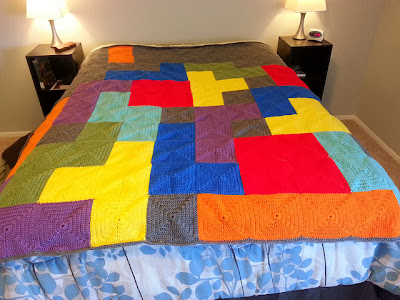 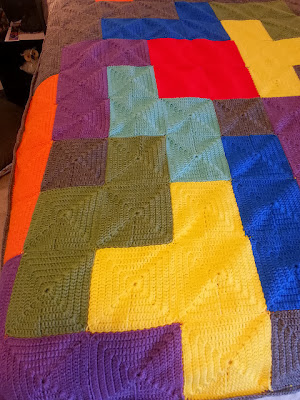 I have to say it turned out very nice, though I haven't heard anything from the happy couple quite yet. Also, after showing my little brother the afghan, he has requested an 8-bit Mario design for Christmas or his birthday.