For the past two years, I have donated a number of afghans to my high school's annual auction to raise money for the school. 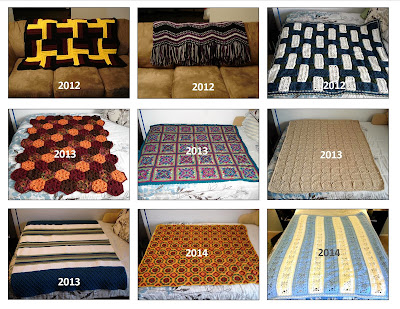 I try to make at least one  per year that reflects the school colors (navy, white, and Kelly green), and this year I chose to make Marianne Forrestal's Crochet Sampler Afghan. I really like the patchwork look of the afghan, plus using one stitch for an entire throw can be a bit monotonous.

There were some issues with the individuals squares of this project. Not all of them matched the sizes of Square 1, some were lopsided, and one was unattractive. I ended up making 11 of the listed 12 (with some modifications) and adding another 7 from Jan Eaton's 200 Crochet Blocks for Blankets, Throws, and Afghans.

Here's a breakdown of how I made the squares from the original pattern. My next post will detail my additions.

Square 1: Checkerboard
I added two rows to the square to make it more square and less rectangular, so Row 15 becomes Row 17.

Square 2: Shell
I added 6 ch. to the foundation, so that I ended up with 6 shells in a row instead of 5. This matched the length of Square 1 much better. I did not add any rows. 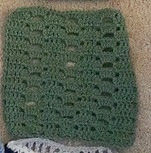 Square 3: Network
I made no modification to this square. I used it as the size template for all the other squares to be consistent.

Square 4: Wavy Rib
I only made 20 rows in this square to match size. I really like the pattern, but you can't really see it because of the dark navy color, even in person.

Square 5: Double O Double V
This is the square I did not make because as I was in the process of hooking it, I found I did not like how the pattern was turning out. I substituted it with a new square from Jan Eaton's book.

Square 6: Crochet Cable
I actually made no changes to this square, but it turned out a bit lopsided. Joining it to the others helped straighten it out. I will caution you to be VERY loose with the Cable St. If you make it too tight the pattern looks a bit like sheaves of wheat, which could be interesting if you were going for a harvest look. 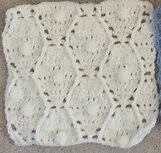 Square 7: Waves and Bobbles
I only followed the pattern to Row 18.


Square 8: Wagon Wheel
This one gave me quite a few problems. The first time I made it I followed the pattern with the exception of adding a couple of rounds before the written Round 9. It came out very strangely, it was almost as if the center rounds were looser/bigger than the outer ones. It almost made a pyramid shape if I picked up the center.

In any case, it would not lay flat, especially after I joined it to the surrounding squares. I frogged it and started over, but the problem kept coming up after getting past Round 6. So I stopped following the pattern after Round 5 and started with the following pattern.


The square lays much flatter than it did, but not still not entirely flat.

Square 9: Radiant
I added one more round before Round 8 in color C.

Square 10: Twinkle, Twinkle
I made the square as written.

Square 11: Slipstream
I first made the pattern as written, but as I went along, I noticed that the width started to shrink/tighten up do that it didn't match size. I frogged it and started over. 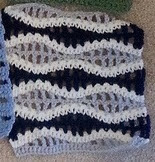 Square 12: Lace Ripples
Made as written.


Here is how the completed squares look in the suggested arrangement, with the exception of Square 5 and the first attempt of Square 8. 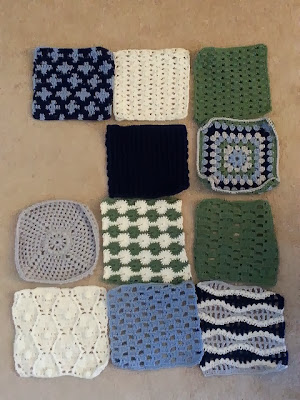